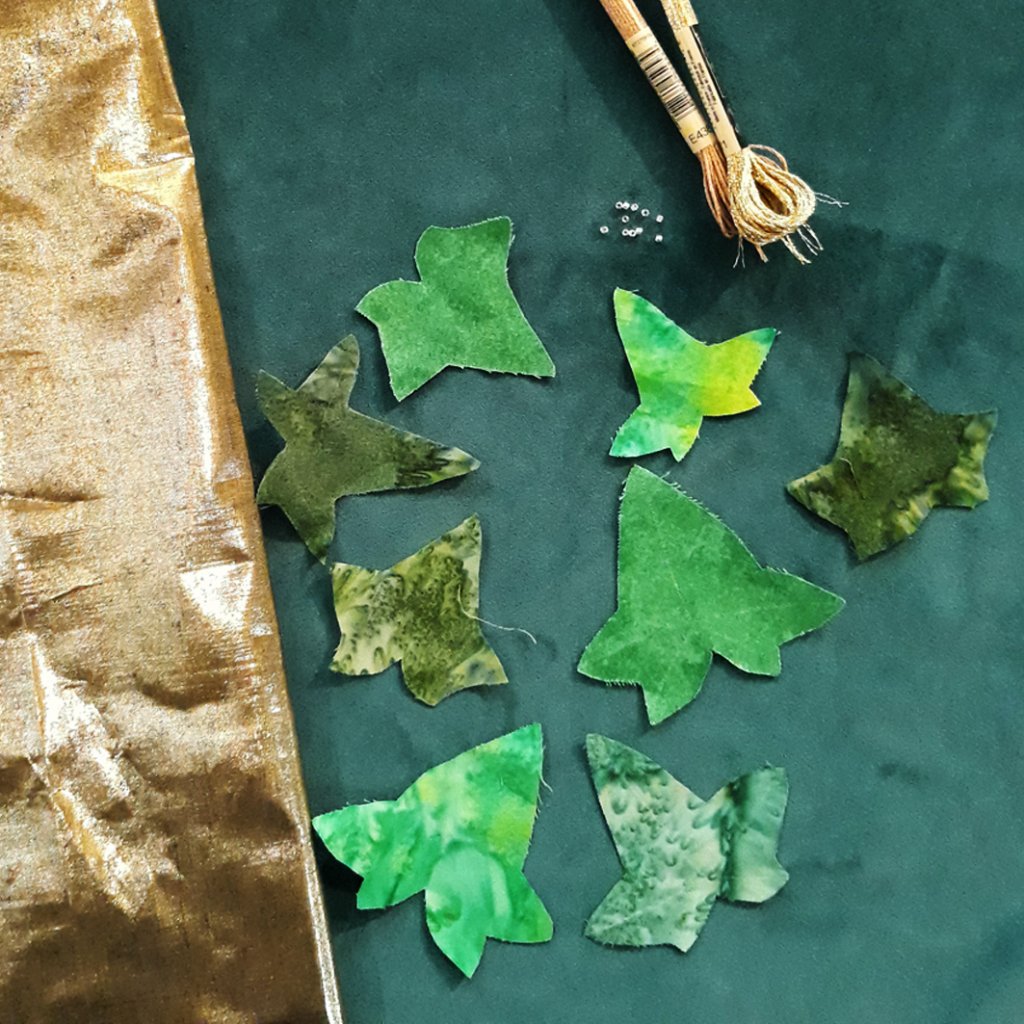 I discovered the Foundation Revealed competition whose theme this year was "Once Upon a Time" (making a costume for a literary character: novel, short story, poem, theater, story, ...) thanks to the designer of wedding dresses and corsetiere Green Martha. It was last spring, the theme inspired me, but 2020 having been what it has been, I left the idea completely aside. My friend L’Oiseau de la Pluie brought it back to my mind by speaking again on January 2, 2021 for the… February 3, 2021 deadline. So I got into it because I was very inspired, knowing that, given the deadline, there was a risk that I wouldn't finish on time. But in just a short month, I had to do some research for the models, then research for the pattern makings, make and redo the patterns four times and three times a fitting cloth, stamping with impatience while waiting for the reception fabrics (after having scoured the sites of my suppliers), carry out myself 17m of golden piping because, inevitably, my various suppliers who offer them were all out of stock at the time, in addition to all the work on the underwear, bodice, skirt and ornamentation. (Spoiler: On D-Day, my computer decided to row and the internet kept crashing, so the competition registration page finally opened… 5 minutes after the deadline. Big frustration as you can imagine, but I tell myself that I would have all the time to be able to do all the ornamentation and finishing that I wanted to present the costume to you as I had them in mind.)

The choice of book and character

A few years ago my brother gave me at Christmas (on the advice of his girlfriend 😊) the first volume of the Green Rider saga by Kristen Britain. It’s one of my literary crushes of the last few years and I devoured it. When I saw the theme of the competition, its heroine, Karigan G’ladheon, immediately occurred to me. The Foundation Revealed contest was therefore a good excuse to re-read the first five books last summer.

For those of you who don't know, here's a summary:

Green Rider tells the story of Karigan G'ladheon, daughter of a wealthy textile trader, a student who left school after the Selium Institute fired her after she dueled a governor's son, who harassed her and other students.

While walking the path that brought her home, Karigan encountered on the road a Green Rider, a dying royal messenger who asked her on his agony to deliver the message he was carrying to King Zacharie Basseterre. Without knowing what to expect, she agreed. By a magical phenomenon, she in turn became, in spite of herself, a Green Rider and received, in addition to the responsibilities of the messengers, the magical powers to go with it.

Very quickly, Karigan and the horse of the deceased rider are hunted down by traitors to the crown, who seek to change the power, in the pay of a mysterious wizard who pierced the wall of D'Yer who kept locked up evil creatures. in the Green Cloak forest.

The adventures of Karigan intersect those of Zacharie Basseterre, king of Sacoridia, Alton D'Yer, another Green Rider descended from the builders of the wall of D'Yer, one of the king's cousins, Lord Amberhill, but also the internal threats perpetrated by the Second Empire, the descendants of the people of an evil sorcerer, as well as political maneuvers.

After my first reading of Green Rider, as I was focused on the story and its universe that I was discovering, I had kept a feeling of medieval fantasy concerning the outfits of the characters. This is what emerges from the general atmosphere, especially from the decorations as well as from the hierarchical organization of the population and their way of life. We also notice beings like elves or witches and some characters have magical powers. On my recent reading, I re-read the story keeping in mind that I wanted to pay more attention to what was written about the outfits. Medieval as well as Renaissance, 18th Century and 19th Century inspirations emerge, but also a little steampunk (in volume 5).

The choice of costume

Karigan G’ladheon being royal messenger, she wears her uniform of rider almost permanently: a linen tunic, trousers, sometimes a coat, all in different shades of green, and riding boots. The result must be very nice, but apart from possibly making a coat using tailoring techniques (I have some notions and experiences dating from my studies as costume designer and costume maker), it doesn’t represent much interest from a technical point of view or personal challenges with a view to competition.

So I looked for another outfit that could be interesting for a costume making. I ended up finding two pretty outfits in book 3:

(Note to my English-speaking readers: I have the French edition novels, so you're reading a personal translation of a French translation of the original text, so my words in this article may differ from those of author Kristen Britain)

"[Karigan] held the dress in front of her at shoulder height so that Mara could see it fully. It was made of velvet in a deep sapphire blue hue, decorated with leaf-shaped patterns. Depending on the light and the folds of the fabric, it sometimes took on midnight blue shades. The puffed sleeves were slit, revealing blue silk, and silver thread shimmered in the rays of the sun shining through the narrow window. ", (chapter 2)

"[Karigan] needed a lot of help getting ready; it wasn't the simple outfit of her childhood, but a complicated system of underwear, fleece, layers of petticoats, and laces needed to keep the whole thing in place. The worst part were the bones of the damn corset in which Tégane had strapped and tightened her, squashing her insides and throwing her to the place where she had been injured it wasn't that long ago. It was making her breasts less than remarkable and doing something… miraculous. Luckily, the town seamstress had adjusted the plunging neckline of the bustier to perfection. A tiny mistake by measure, and it would have disclosed too much." (chapter 2)

"[…] she dozed off, dreamed that she was walking in a garden wearing a deep green velvet dress, with threads of golden fire that sparkled in the sun.", (chapter 2)

Reading the passages about these two outfits, I understood that the outfit in Karigan's dream was a green and gold version of her blue velvet and silver thread dress. So I decided to make a costume combining my interpretation of a combination of these two dresses.

While being a fantasy costume, the outfit described clearly has 18th Century influences for most of the dress and Renaissance for the slashed sleeves.

I wanted a rather 18th Century general silhouette.

Having defined this, it was therefore clear to me that I was going to wear my 1735-1750 stays and 18th Century shift under my costume.

Not being a fan of paniers of robes à la françaises, I therefore looked for false rump from the late 18th century to give volume to the back of my costume. To save time, I happened to find a very well explained pattern at Scroop Patterns during this period.

Then I needed green velvet, which I took a long time to find (I am difficult (demanding depending on the point of view) concerning the shades of green that I like and which, necessarily, aren’t the most common for fabric) and gold (complicated to find if you want to avoid polyester satin) to bring me back to the indications of the novel.

I also had patchwork fabrics in different shades of green to make leaves that I kept for years for a project that was ultimately aborted (because not the necessary knowledge and experience, nor a very well defined project, at that time). So I decided to bring out these fabrics and add lots of leaves to my costume.

And, regarding the ornamentation, I was inspired a little by a dress worn by the character of Emma Swan (played by actress Jennifer Morrison) in the series Once Upon a Time. I’ve liked this show a lot since I knew it and I find its costumes to be superb.

All of these influences mixed together resulted in this costume that I imagined.

So much for the inspirations and the model. I’ll write an article dedicated to the making of the costume with pictures of the details as soon as I finish my finishing touches and the ornamentation of the skirt. I also hope to be able to take some pretty pictures soon.

(Kristen Britain’s publisher is Daw Books, but I couldn't find on their website where we can find the books, so here is an online store (other than Amazon) where you can buy Green Rider)